Posted on November 3, 2011 by kimberly kelly 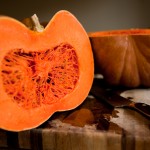 around October & November we buy these beautiful gords, miniature pumpkins & squash… they sit as decoration and then when Christmas decor comes in… these guys get thashed- literally. NO!!!! Be Thrifty AND have an elegant dinner. Here is a recipe for a my “Fairytail Pumpkin Soup” (an actual type of pumpkin/squash) though you can use most any small pumpkin or large squash variety for this. Two things you might notice and MIGHT move on saying, “thats not for me”. I challenge you… Open your pallet and your mind! There is NO cream in this VERY creamy soup. There is also a spice mixture that might boggle the mind- get spicy & try it, you’ll love it!

I hope you also enjoy the music and video… Drivin & Cryin frontman and friend, Kevn Kinney has watched the VLOGS and gave permission to use his music. BIG Thanks (he’s a good cook too by the way!)

Here’s a little info on the pumpkin, before you grab the recipe below:

*Extract…. East China Normal University research on type-1 diabetic rats, published in July 2007, suggests that chemical compounds found in pumpkin promote regeneration of damaged pancreatic cells, resulting in increased bloodstream insulin levels. According to the research team leader, pumpkin extract may be “a very good product for pre-diabetic people, as well as those who already have diabetes,” possibly reducing or eliminating the need for insulin injections for some type-1 diabetics. It is unknown whether pumpkin extract has any effect on diabetes mellitus type 2, as it was not the subject of the study.[20]

*Pumpkin seed oil… Pumpkin seed oil is a thick, green-red[23][24] oil that is produced from roasted pumpkin seeds. When used for cooking or as a salad dressing, pumpkin seed oil is generally mixed with other oils because of its robust flavor.[25] It is used in cooking in central and eastern Europe. It is considered a delicacy in Austria, where a little is often added in traditional local cuisine on pumpkin soup and on potato salad. In some restaurants in Vienna, they propose even to add a few drops on vanilla ice cream. Long believed to be a folk remedy for prostate problems, it has been claimed to combatbenign prostatic hyperplasia.[26] Pumpkin seed oil contains essential fatty acids that help maintain healthy blood vessels, nerves and tissues.[27]

(cut the pumpkin in half, dig out seeds and bake cut side down till tender. You can cook the day before and have on hand or freeze for later)

1 can of coconut milk

***if you want a thinner soup you can add a chicken or veg. stock, but it’s good with out it.