Posted on February 5, 2012 by kimberly kelly 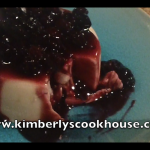 This was an experiment to see if you could streamline the ingredients of the famous Italian dessert known as a Panna Cotta. It usually has one part HEAVY CREAM and one part WHOLE MILK. I switched to just Half & Half (which you may have around for coffee anyway). Real vanilla bean is divine, but we opted for REAL flavoring (& don’t skimp to imitation). This dessert has 3/4 cups of sugar in all the custard and sauce combined- so each serving is not that bad and you’ll find it just sweet enough, but not overly so.

Now, lets talk MILK and LEMON. Funny story. When I was in college and waiting tables at Swensen’s (remember those in Greenville, SC?) They were a grill that also made homemade ice cream and I worked and managed there for many years. It’s actually headquartered in Ontario, Canada. Great restaurant! (and I later found a husband who was based out of Ontario, Canada too, Hahaaa.) But I have jumped the track, back to the story… when we served hot tea it was accompanied by all possible condiments: sugar, cream and lemon. When returning to the table the check on my customers, the lady said, “your cream is curdled.” I apologized and removed it as I walked, puzzled away. I knew we were good at FIFO (first in, first out) & food safety/quality. I promptly handed her a new cup of tea accompanied by an extra apology and more cream. She calls me over again, just seconds later… “this cream is spoiled too!” Now, in my memory, we went back and forth like the movie “Groundhog Day” but in reality I think it only happened about 3 times. Finally, I asked her how she was preparing her tea, “with sugar, cream and lemon” she said. Ah-Ha… there’s your sign. I explained (nice & gingerly as though it “could be”) that the lemon was curdling the half & half.

That’s where this recipe is going to scare you. When you add the lemon infused gelatin and get a small curdle start. Some pana cotta recipes have creme fraiche -so I was thinking, any thickness from the whisked in curdles only adds to the consistency. (and they do whisk smooth) It all worked out.

So while every chef out there thinks “panna cotta” is the over used dessert to impress with… I say, impress your family. Chances are you’re not fixing them as frequently.