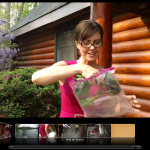 Today… this week in fact, has been so busy and crazy at work. Just when I’m at my breaking point- “The Sons of Ralph” stop by the TV show.

If Ralph Lewis and his boys can’t make your heart smile and shed some stress… you’re in trouble!

MUCH to my surprise- I found out they watch this vlog!!! …that MADE MY DAY. Then they said, “kimberly we brought you a present….” as he pulled a baggie out from his jacket. Can I just tell you that when a musician from the mountains hands you a baggie, your mind could take that to another place. However, the only stinky thing in this bag was a “mess of” (southern measurement) Wild Ramps from their North Carolina Home. Now we all discussed what a ramp was closest too… and well, it’s a wild leek.

I was so happy… not since being a child in Mississippi, when Mr. Heyworth would knock on my Grandmother’s door and say “Mz E-ver” (that’s Miss Eva) got some watermelons out of the garden for your grand kids” Yeh, I was that happy… over what some would call a weed… (don;t go there again).

Ralph and his boys are such a blending of times. Ralph, a legendary banjo player who hung and played with Earl Scruggs and Lester Flatt and Bill Monroe. His sons, a new generation of that earthy, American music that speaks to ALL.

I know what I fixed was not TRADITIONAL… in fact, they suggested cooking the Ramps up in “Hog Fat” adding potatoes and eggs. YUM!!! I want Breakfast at the Lewis house.